"Where Do I Put P?" An Introduction to Peer Feedback

"Construct Viable Arguments and Critique the Reasoning of Others" is a new expectation for students that is proving to be challenging for them, and for me.  How can I offer students opportunities to do this without just asking them to "give feedback"?  They don't necessarily know how to give and/or receive feedback, so what structures can I put in place to help them be more successful?

I have used this problem from MDTP (http://mdtp.ucsd.edu) in the past as a whole class activity.  Students think about the problem independently, then discuss as a table group, and finally share with the whole class where they would put P.  I would draw the number line on the board and a group member would come up and place a magnet on the line that represented the position of P.  (Forgive the formatting - for the life of me I could not get the points to rest ON the line)

I chose to introduce this problem a little differently this year.  I gave this task to the students using a template that Dr. Patrick Callahan (Co-Director of the California Math Project) had shown me.  The template is designed to offer students a structure and process for providing and receiving feedback. 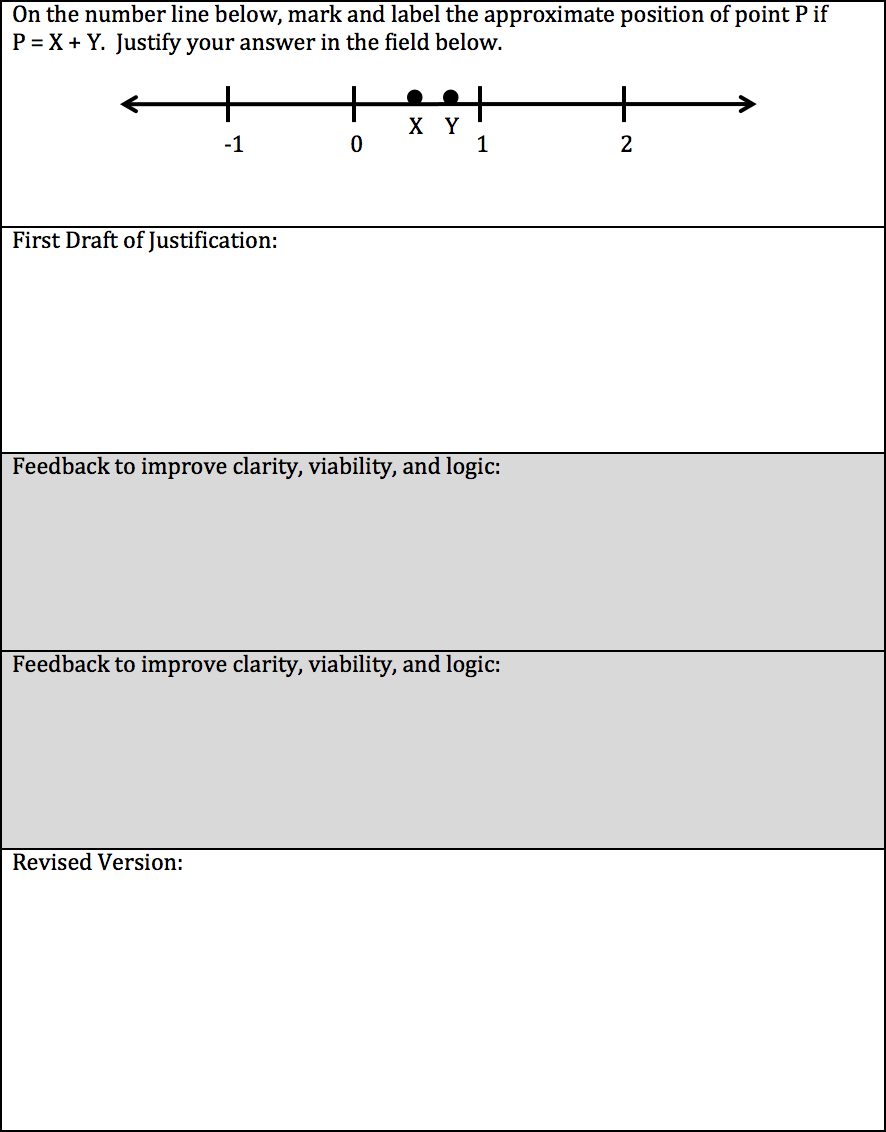 I knew that if I just gave this paper to students and said "GO", they would have felt very unsuccessful and discouraged, so I knew I needed more structure.  I have found that the more explicit and transparent that I can be with my students, the more likely they are to try and persevere.  Here is what I had written on the whiteboard: 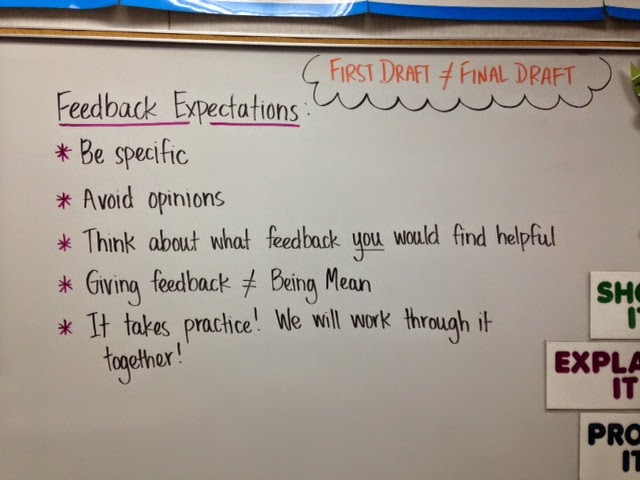 We acknowledged that this was a new process for everyone, but that it was acceptable and expected to not have it perfect on the first time (notice what is written in orange).  I read these expectations to my students at least 4-5 times throughout the lesson, reminding them to try hard and stick with it.

So, that's how I was building the culture and expectations of providing feedback, but I felt that they would also benefit from some specific examples, so here's what I wrote: 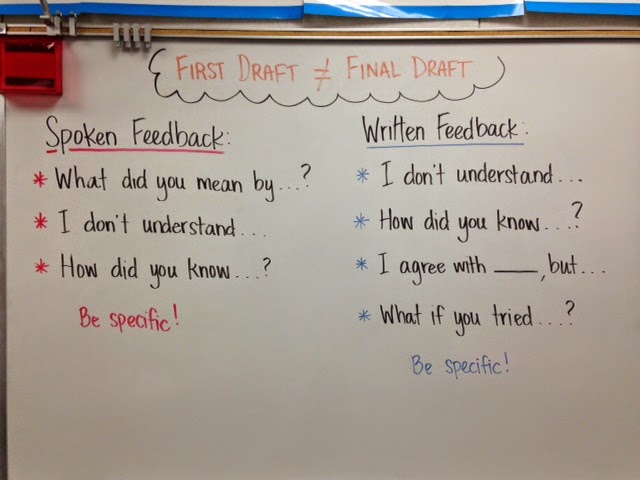 And with that, we were on our way.  Here's how the lesson flowed...

Step 1: Students write their own individual argument in the "First Draft of Justification" box.

Here's an example of a pair of arguments from students who were working together: 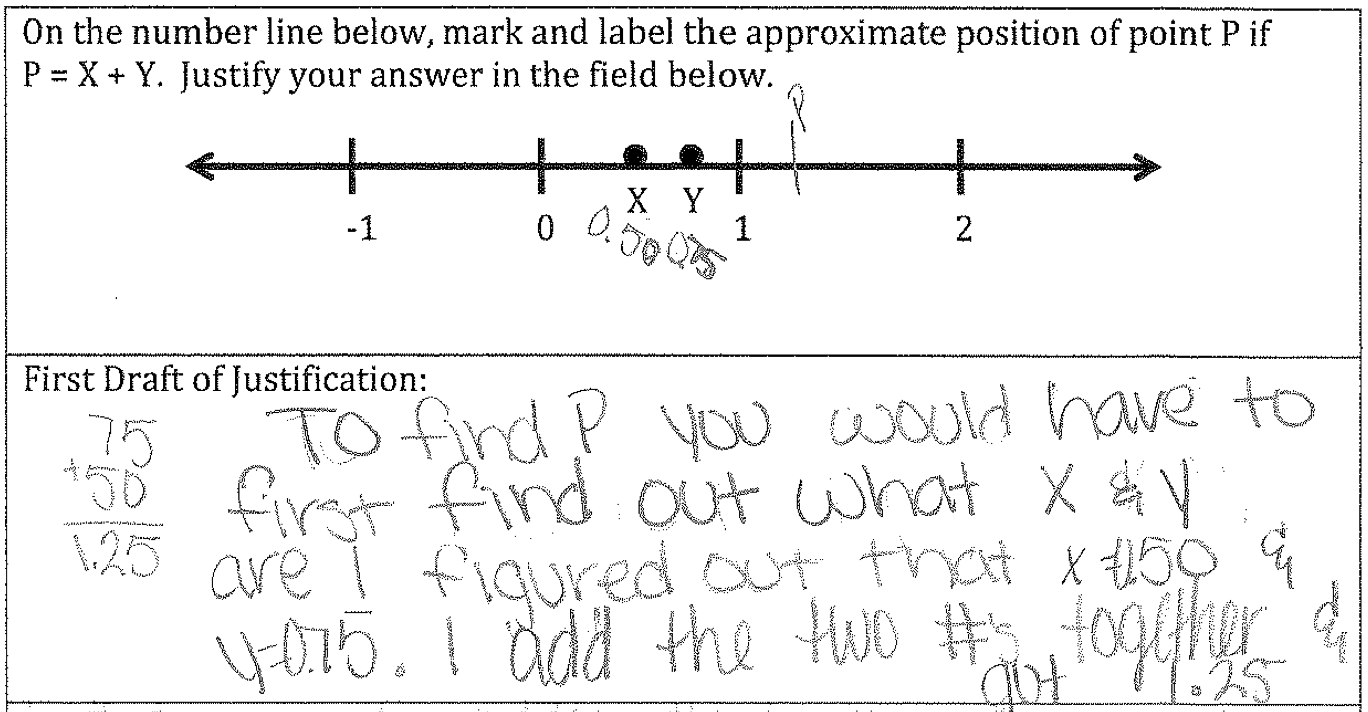 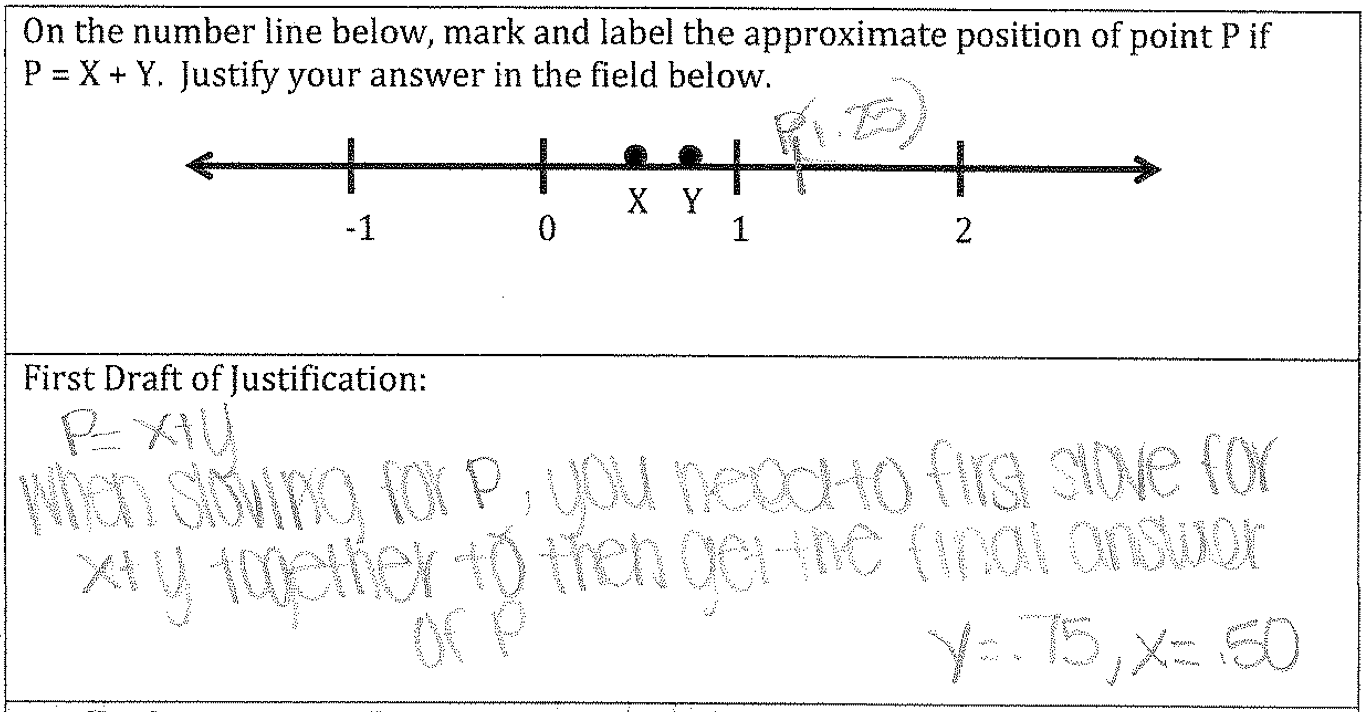 Step 3: The other partner reads their argument, just like the first student.  Then, as a pair, they decided whose argument would be shared with another pair to receive feedback.  I did not give any suggestions as to what criteria should be considered when selecting whose argument should be selected, it was totally up to them.  The reason that I had one argument from each pair "travel" to another group is because I wanted students to practice giving written feedback as pairs, not as individuals.

Step 4: I chose a random piece of student work (avoiding the disclosure of the name) to put under the document camera.  As a class, we read the argument and brainstormed possible feedback that would be useful.  How could we help this student make their argument clearer, more viable, or more logical?

Here are some that I chose to start the discussion:

Step 5: Students held up the paper that was to be sent to another pair, and I came by to grab them.  I distributed one new paper to each pair and students began reading the arguments.  Students consulted the whiteboard to see what sentence starters would be appropriate for providing written feedback on this particular argument.  Together as pairs, students provided feedback on the first draft of the argument.

Step 6: Again, I chose a piece of student work at random to put under the document camera so that we could discuss the feedback and how it related to the "Feedback Expectations" I had written on the board.  This time we considered if the feedback was useful, we were not as worried about the first draft of the argument.

Here are some samples of feedback that we looked at: 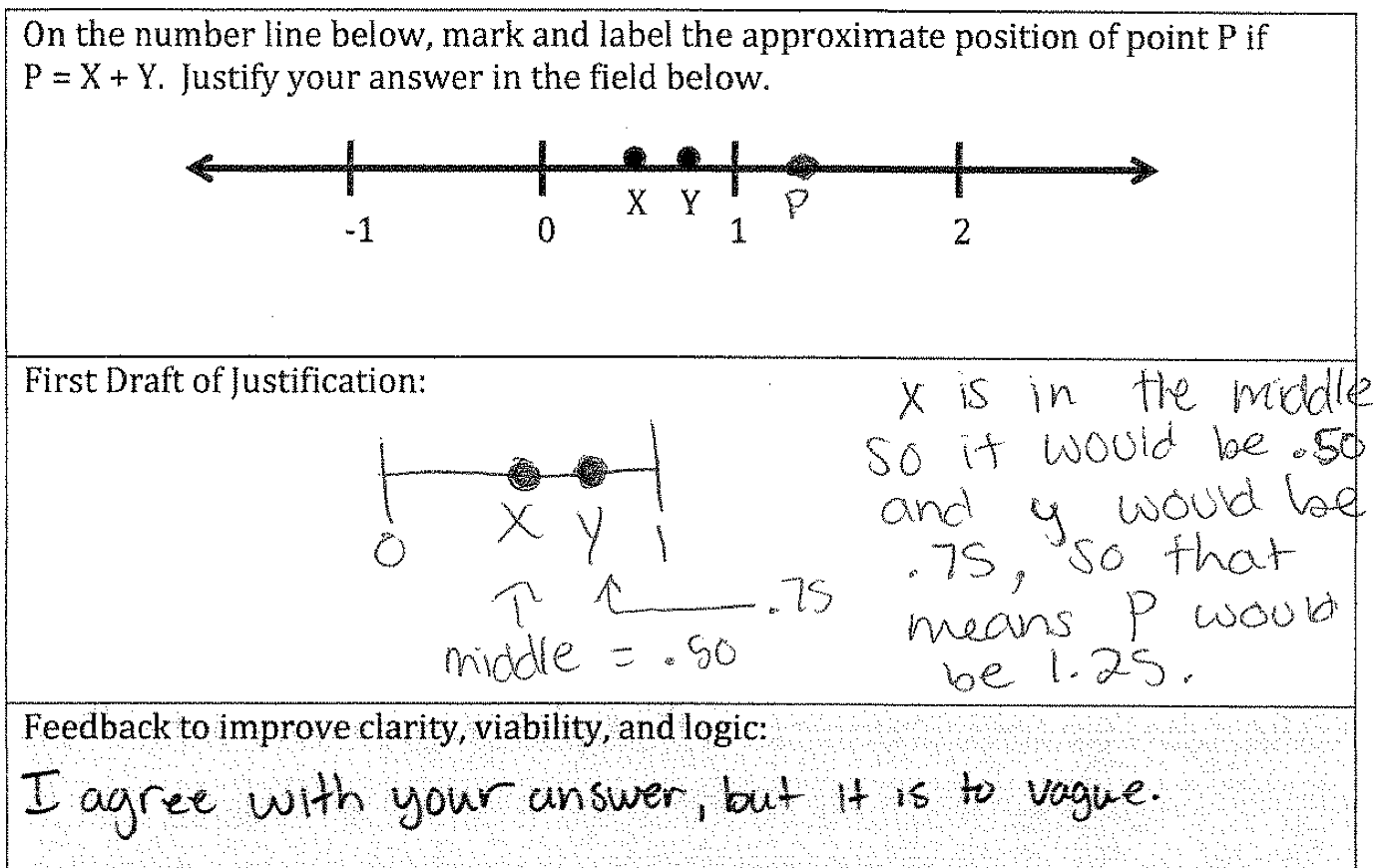 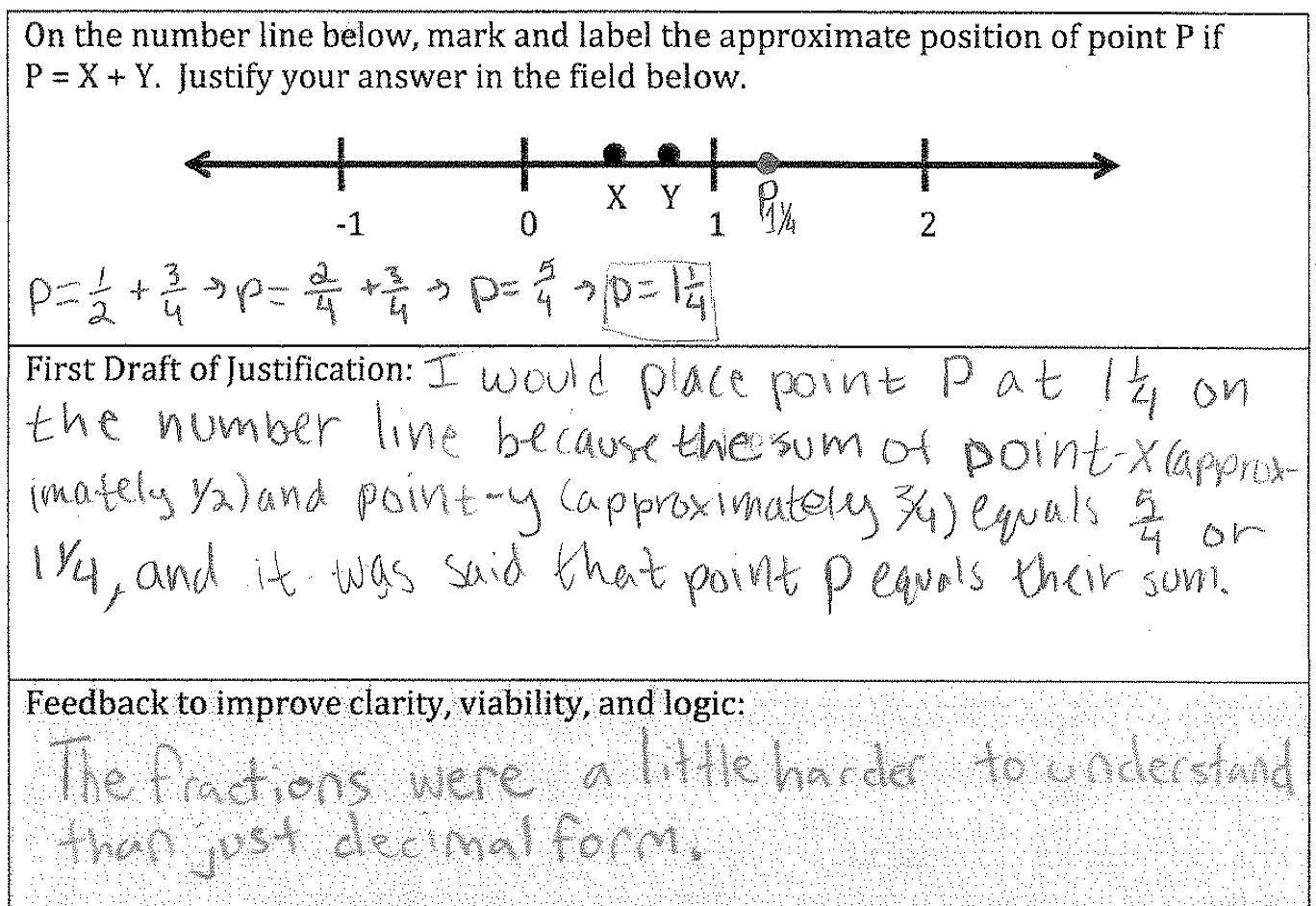 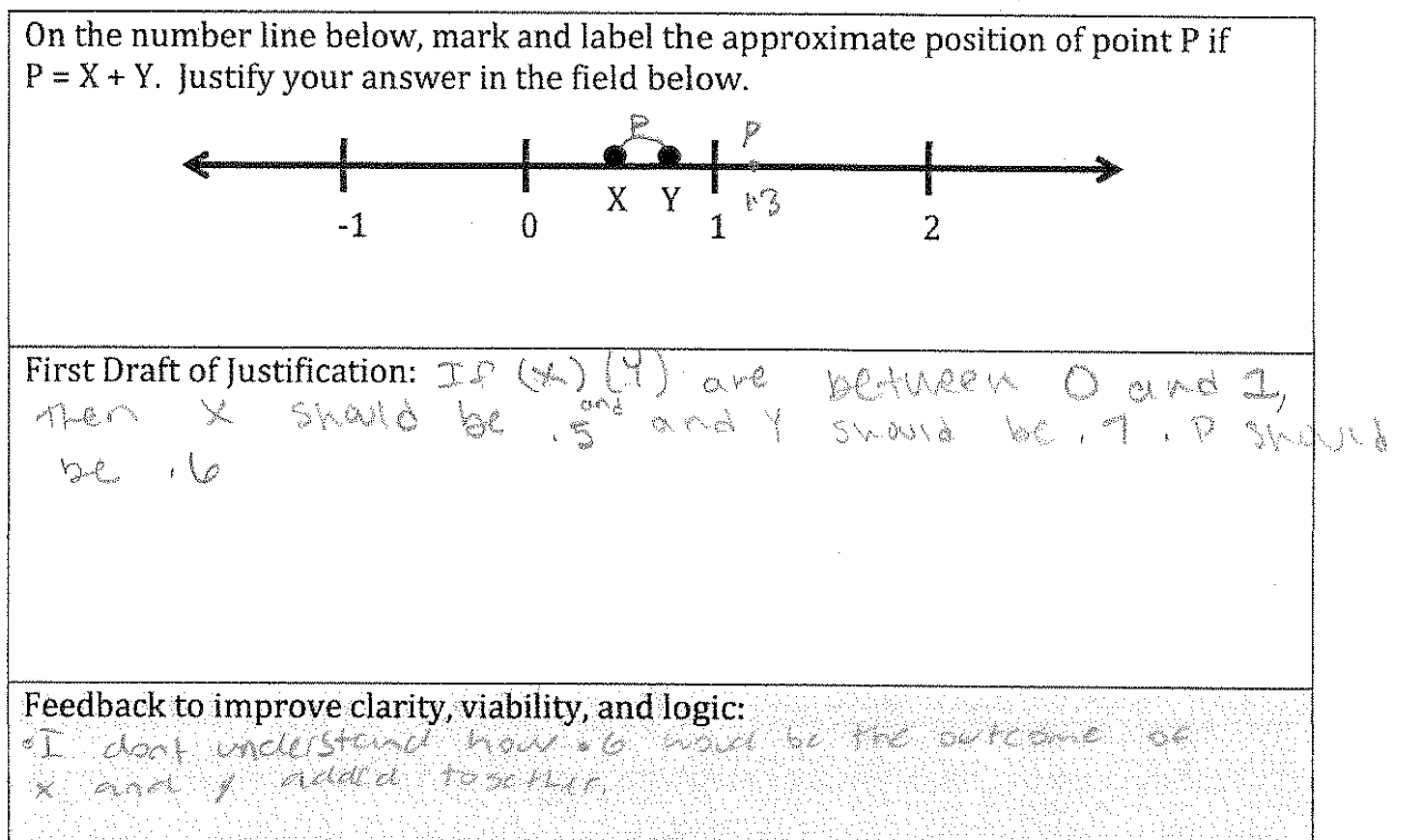 Step 7: Essentially, we repeated Step 5.  This time, when students got a new paper they were reading the first draft of the argument and the first round of feedback to see how they could build on the story.  What new feedback could they provide?  I was very clear that it was unacceptable to just write "ditto" or "what they said".  I pushed them to think of new feedback or a suggestion that would build on the existing feedback.

**When I have shared this template with other teachers, they have suggested that I reformat it so that it goes First Draft, Feedback #1, Second Draft (meaning the owner of the paper gets it back after the first round of feedback to revise their argument), Feedback #2, and finally Final Draft/Revised Version.  I have not tried this yet, but it would potentially help with the "ditto"/"what they said" issue.

Step 8: I repeated Step 6 except now, we were looking at the whole "story" as it unfolded to consider what worked and what didn't.  What were some good examples of meaningful and useful feedback, not so great examples, etc.

Step 9: I returned the papers to their original authors to read through the feedback and revise their arguments.  Because I only had one paper per pair receive feedback, I had students work as pairs to brainstorm the best way to revise the original argument.  Then, as individuals, students filled in the last part of the template on their own paper.  Even if their argument did not receive any feedback, I thought that students had seen enough examples that would help them revise what they had originally written.

These are the final products of the two I shared above in Step 2 (notice that the paper that was not passed did not have written feedback): 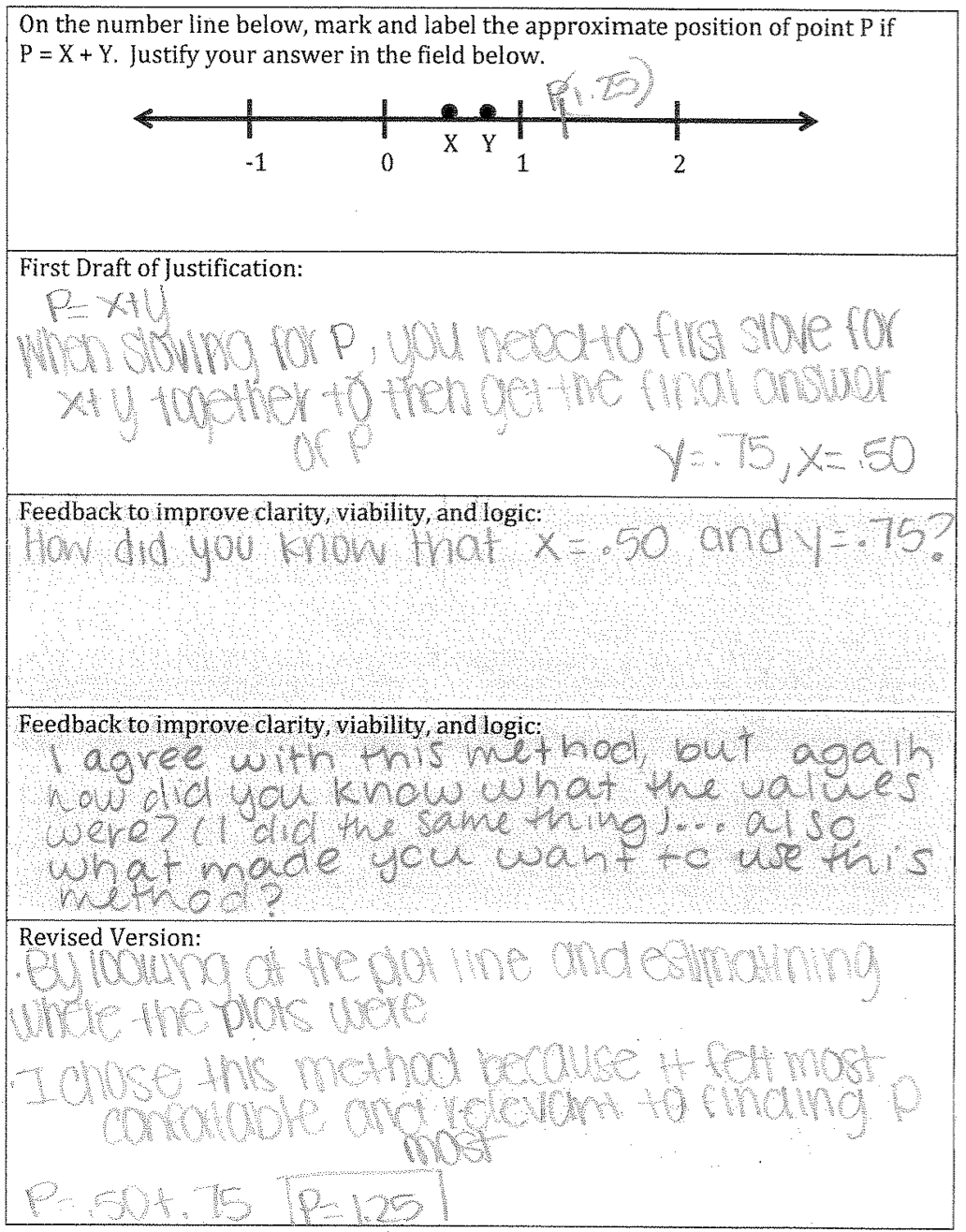 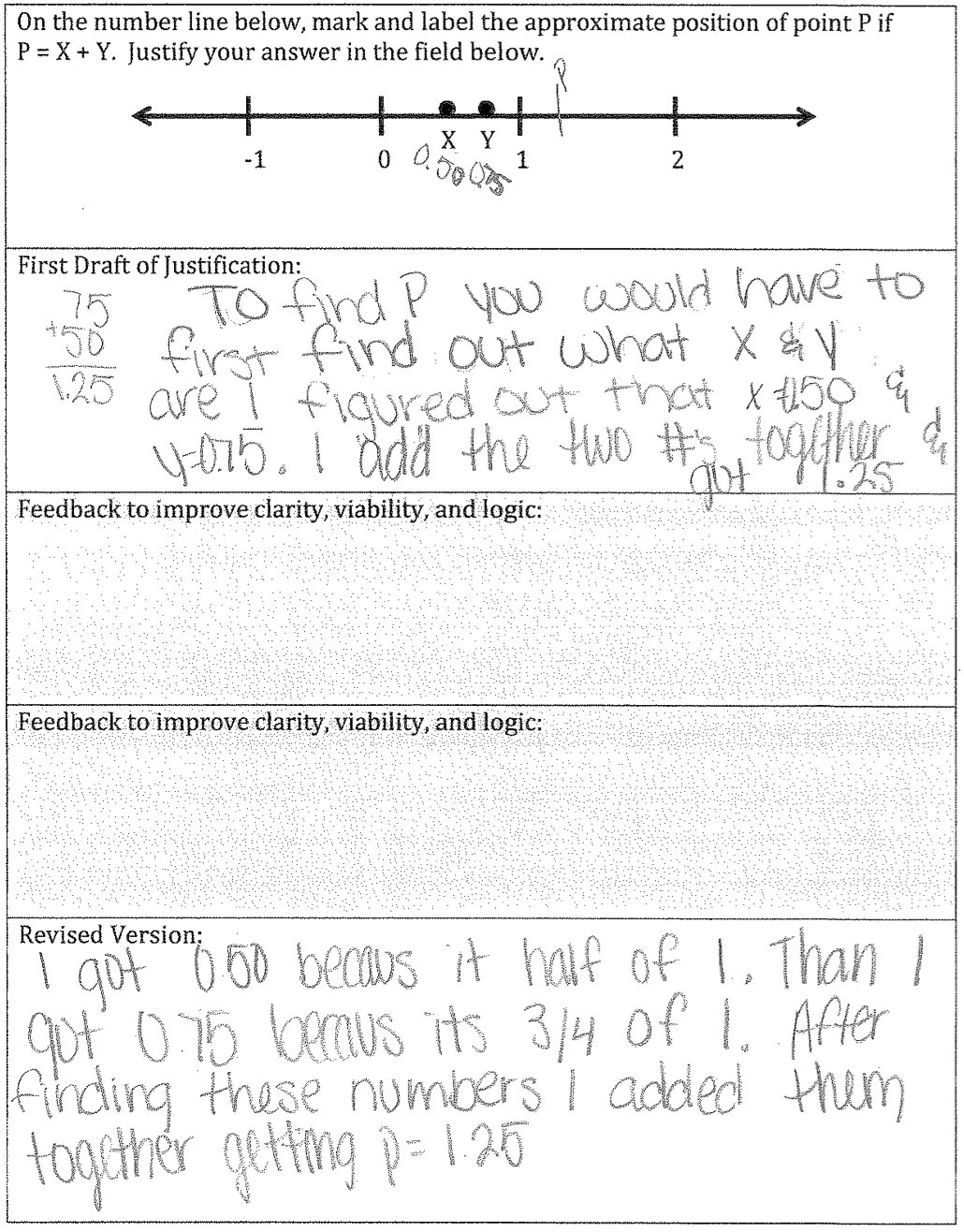 Closing: There were essentially three main methods that students used to answer this question.  The first, and most common solution was to assign values to X and Y and then add those values together to determine the value of P.  The other two, which were very rare in each of my three classes, were first, identifying the distance (or length of the segment) between 0 and X and then adding that distance on to Y (in the positive direction), and second, speaking in more general terms about X and Y.  For example, a student might say that X and Y are both greater than 0, therefore their sum would also be greater than 0.  Furthermore, students might say that X is approximately one-half, and Y is greater than X, but less than 1, therefore their sum will be greater than 1, but less than 2.  All methods involve very different thinking, and I LOVE it!

Here are some samples of the various methods: 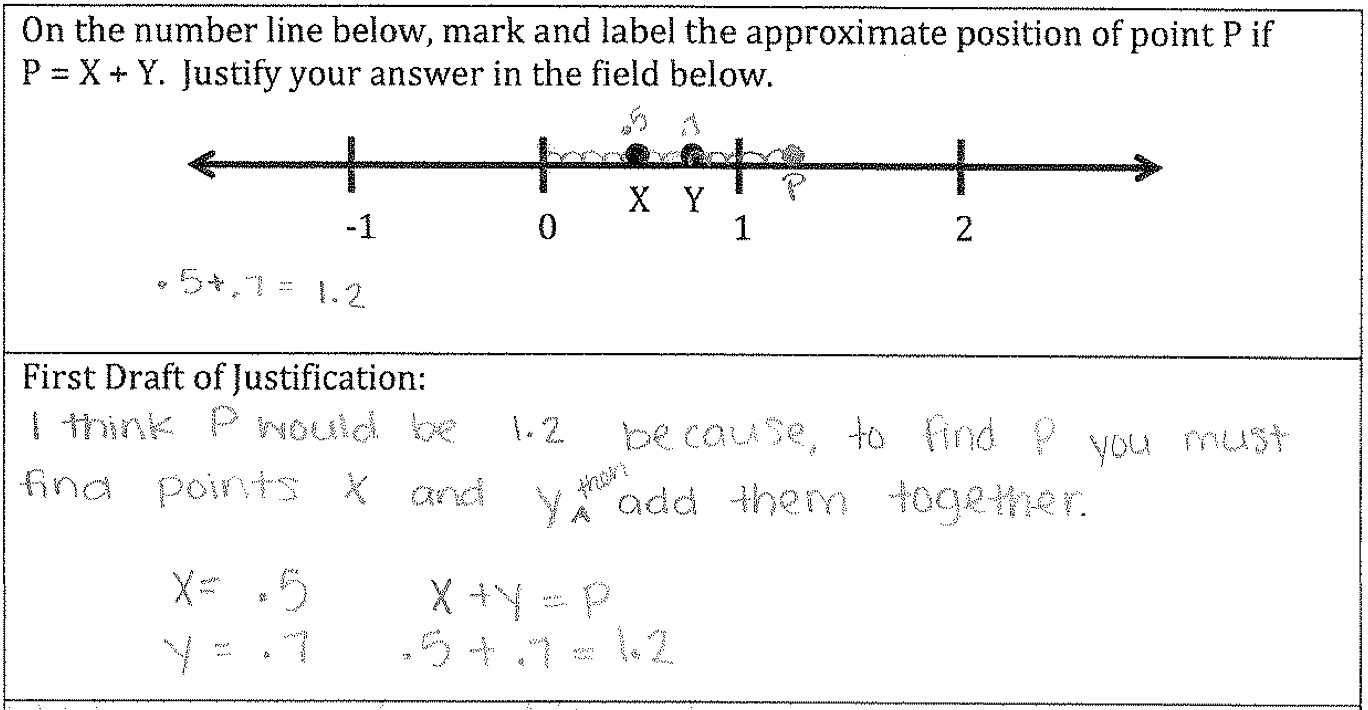 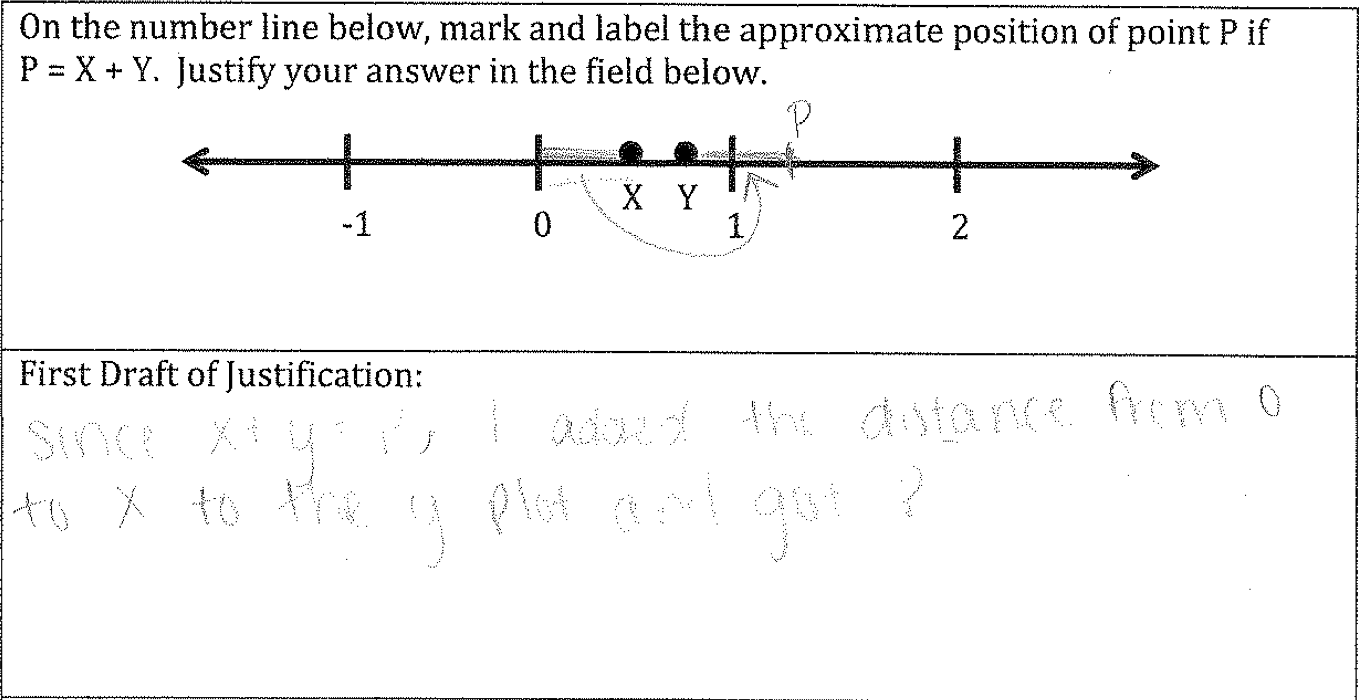 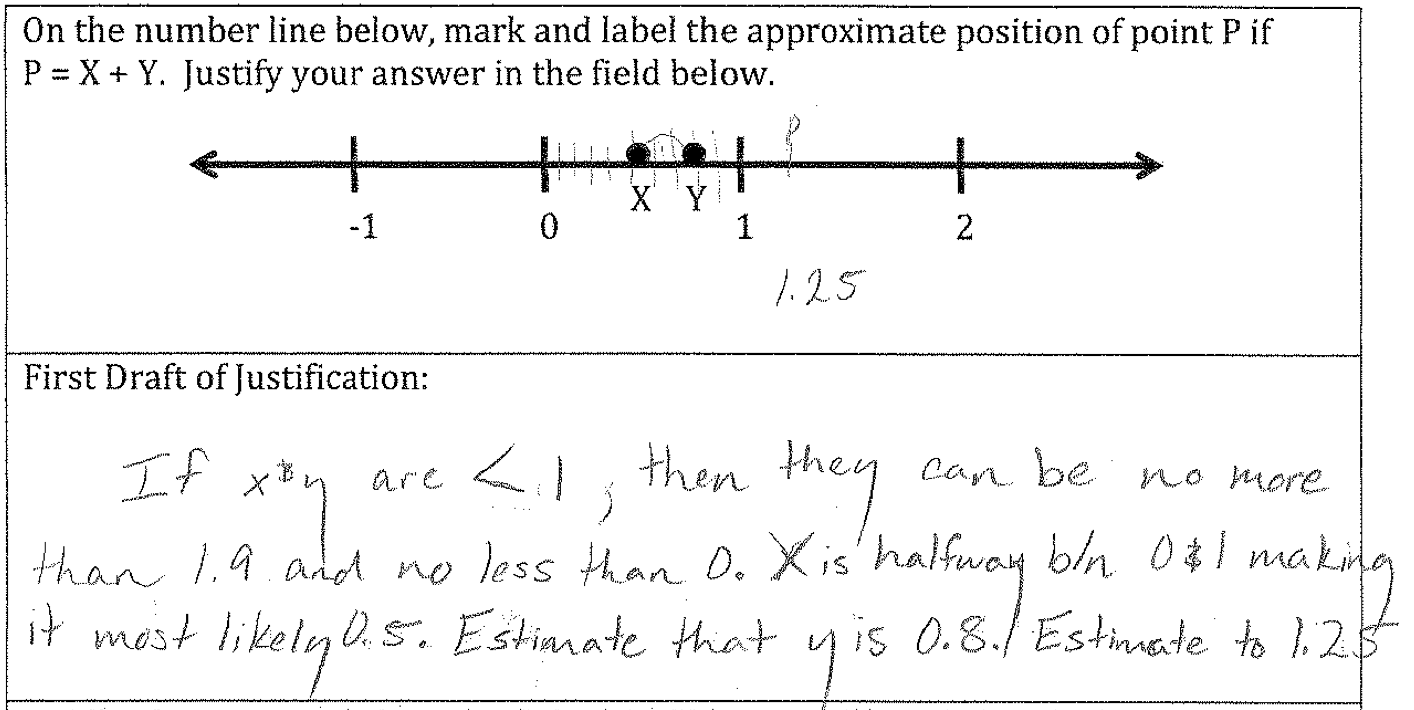 I took the time at the end of the lesson to show my students these three approaches, because I felt like there was not a lot of variety in the arguments that they got to read.  This was probably the greatest down side of this particular problem, because as a result, there was not a lot of rich discussion about alternate methods or solutions.  However, once I showed my students the less common methods, it was obvious that they appreciated the fact that there were other ways to do it.

Lastly, I wrote four words on the board, "Successes, Challenges, Liked, Learned".  I asked students to flip their papers over (the back of the template was blank) and write about any or all of these four topics.  What I realized was that they really valued the open ended nature of this activity, they admitted that giving feedback was difficult, but they hoped that we would do it again.  And oddly enough, when asked to write a reflection, nobody asked things like, "how long does it have to be?"

Here are some of my favorite reflections: Sorry for the light writing 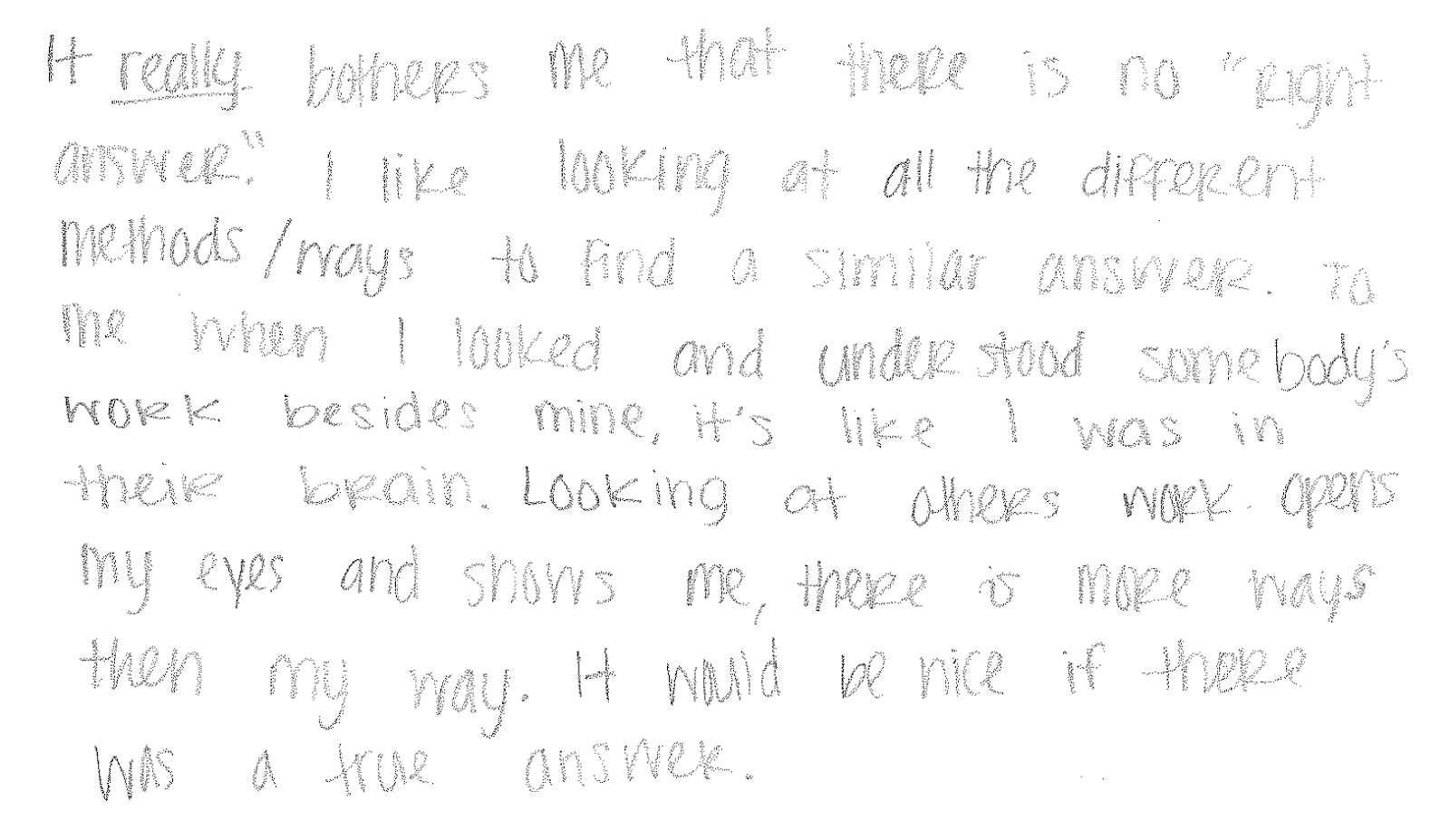 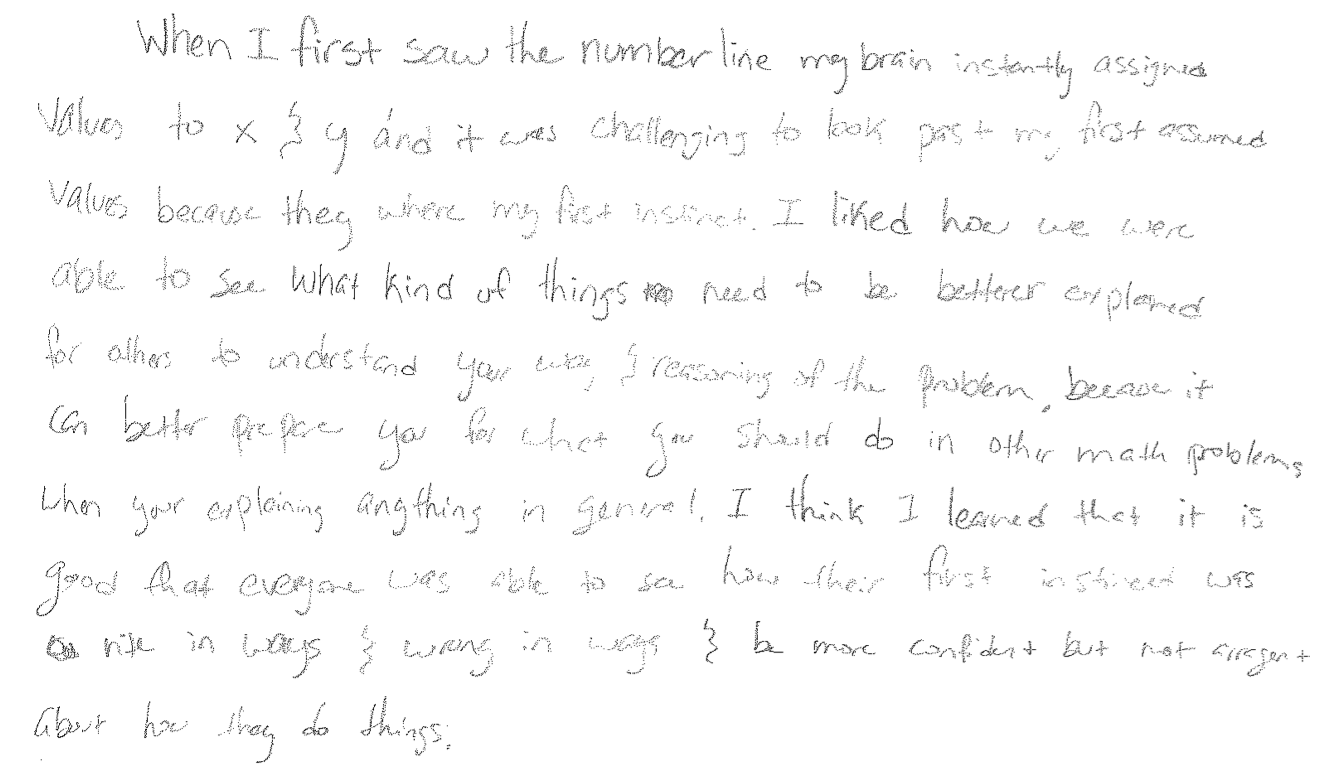 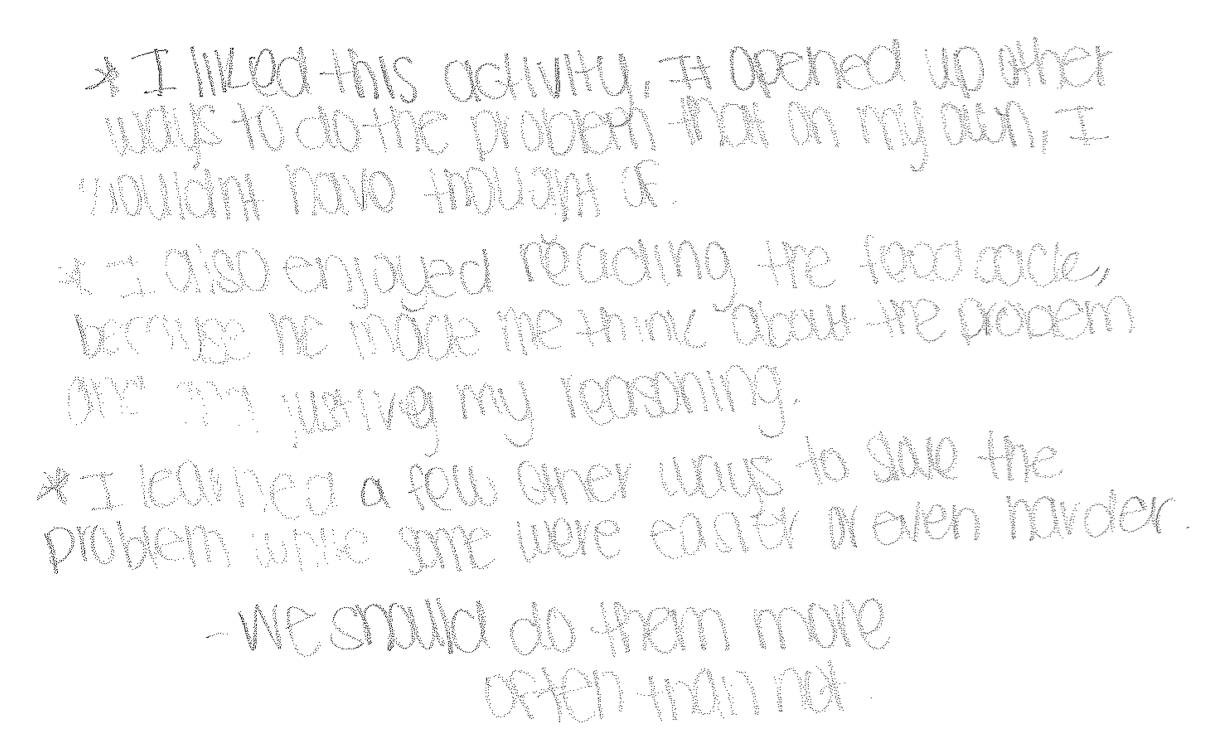 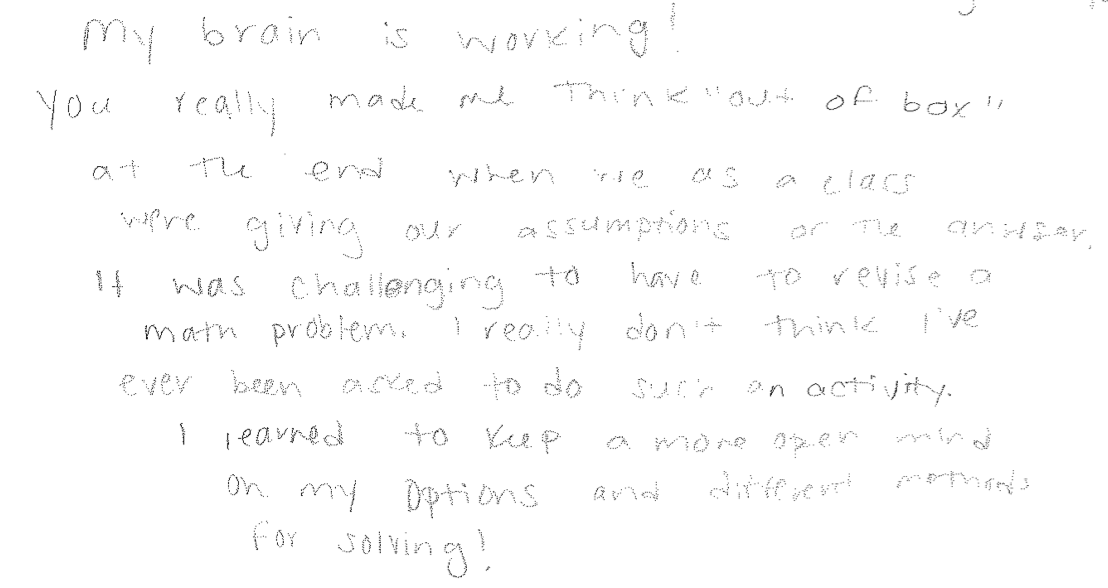 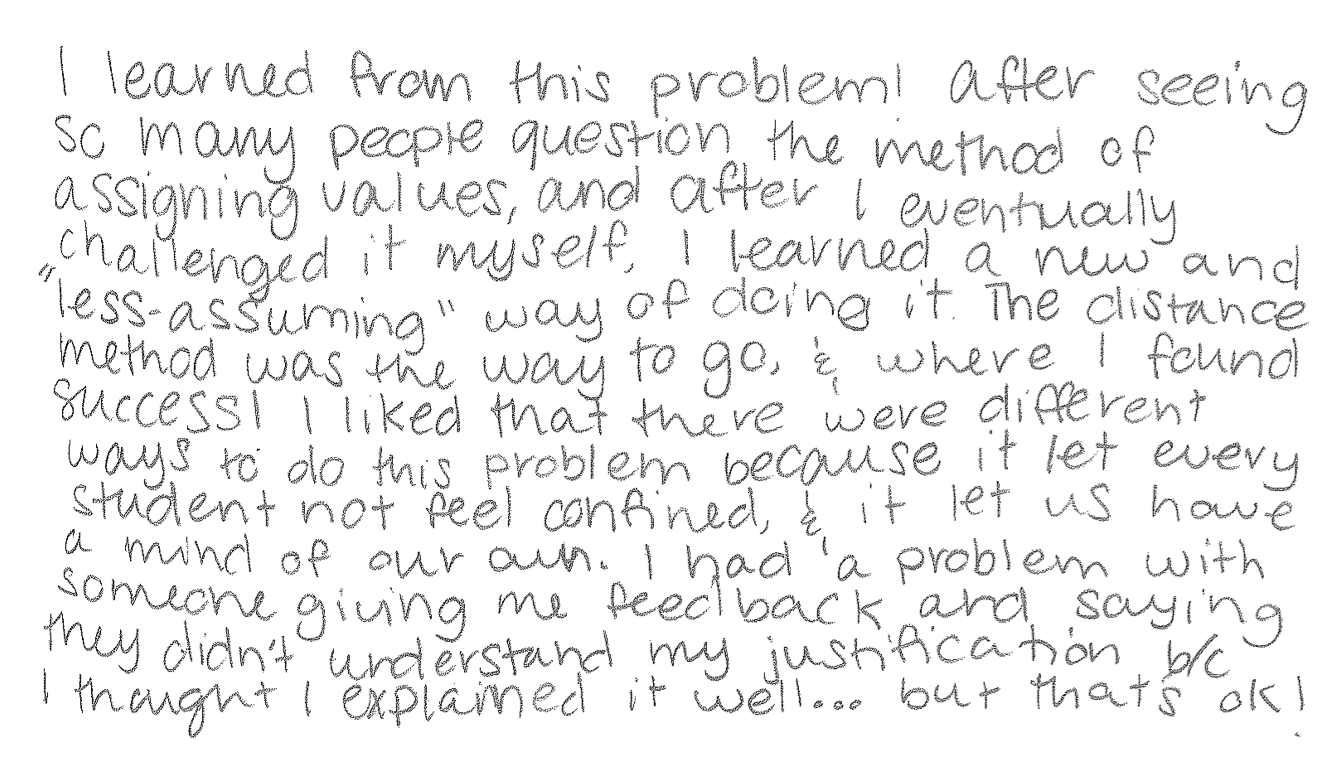 Overall, I thought this was a really great way to start the year and it really set the tone for my expectations and my style of teaching.  If I were to do it all over again, the only thing I would really change is the task I chose.  I would prefer to use a task that elicited a wider variety of solutions from my students from the beginning.  That being said, this particular task has two other parts, one where students need to place points on the number line that represent Y - X and X - Y, and also X times Y.  Perhaps this could be a good follow-up task to try next week or later in the semester?
Posted by The Mathy Murk at 7:02 PM